In 2019, Abarth & C. Celebrated its 70th anniversary. Celebrating this, on the 5th and 6th of October, Italy traveled to Abarth Days, a memorial festival held at the Expo site in Milan. The next day, the FCA Heritage Division visited “HUB” which opened in Turin this spring. The hub is a facility that gathers successive Fiat, Alfa Romeo, Lancia and Abarth vehicles owned by the group and is positioned as a meeting point for heritage fans. We enjoyed classic Abarth here and enjoyed the wonderful time of 70 years with the commemorative festival.
*
No car matches the Italian temperament like Abarth. Ferrari is proud of them, Alfa Romeo is the home of the heart, Fiat who projects the ups and downs of Italy as it is. If this is the case, I think Abarth is the car that best understands our tastes. The keywords are differentiation and performance.

They were a little different from others and matched their tastes that like to be a little faster than others. There is a misnomer to say ＂a little＂ with an Abarth machine.

70th anniversary model 695 70 ° ANNIVERSARIO [2019]695 70 ° Anniversary debuted at this event to commemorate the 70th anniversary. Based on a 595 Competizione equipped with a 1.4ℓ turbo engine, a roof spoiler with a 12-step adjustment function was newly installed. It is said that it produces 42kg of downforce when driving at 200km / h with the maximum open at 60 degrees. It seems that the Abarth 1000TCR of the 1970s, which fixed the rear engine hood horizontally for the purpose of improving aerodynamics, was a hint. On the other hand, the body color is a tribute to the Fiat 500 Eraborazione Abarth Recolt. A dull green called Verde Monza. The lower part of the body is Abarth's iconic gray color. Of course, scorpion decals are still alive. 1949 units are produced after the founding year.
*
Abarth & C. was born by Italian Austrian Carlo Abarth. His greatest achievement is not only the production and sale of exhaust systems and steering wheels represented by Marmitta Abarth [Abarth Muffler] from the end of the 1950s, but it was built into Fiat's mass-produced cars and made into complete cars Probably. Powerless popular cars such as 600 and Nuova 500 were transformed into small, spicy yams. 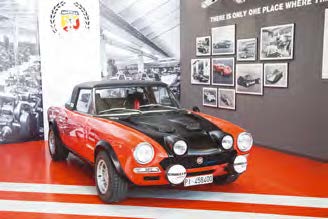 Fiat Abarth 750 Record [1956]Developed in 1956 for the first challenge of the FIA ​​World Speed ​​Record, the 750 Record was tuned based on the Fiat 600 750 Vibelobello and gained 44 ps. The weight of the vehicle is only 385kg due to the adoption of an aluminum body panel. Bertone gave streamlined styling with small tail fins.
124 Abarth Rally [1972]Abarth's first mission, which became part of Fiat in 1971, was the development of the company's works team vehicle that decided to participate in the international rally. The in-line 4-cylinder DOHC 1756cc mounted on the 124 Sport Spider was tuned to achieve thorough weight reduction. Participated in the race since 1973, and won 2nd place in the Makes Series Ranking.

He is a leading figure who developed a genre called tuning car. Carlo was passionate about speed challenges and races in anticipation of advertising effects. In fact, Abarth's name was immovable due to many record updates and victory, but the race funding gradually squeezed management and forced him to join Fiat in 1971.
*
In 1971, Abarth launched over 20 mass-produced cars. Add one-off or design study models to increase the number. Although some models were produced in collaboration with Carrozzeria, such as the 61st Fiat Abarth 2400 Coupe Alemano, Carlo himself seemed not proactive in producing prototypes based on mass production. 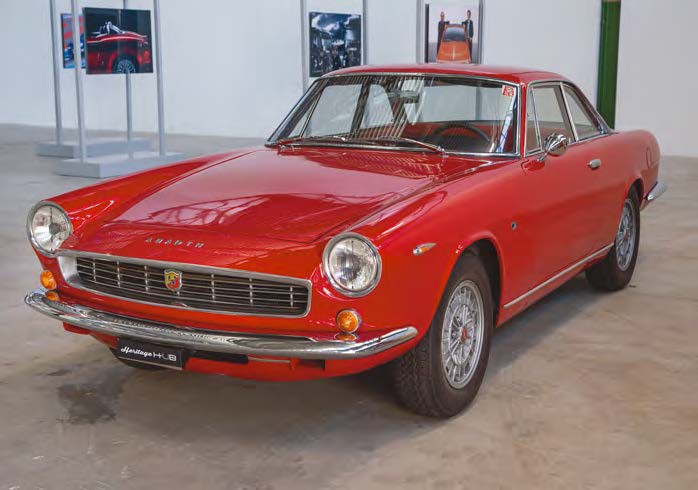 Fiat Abarth 2400 Coupe Alemano [1961]Featuring a refined design of the Fiat 1800/2100 OHV engine [ramp-ready design] that combines a double rocker arm and a multi-sphere combustion chamber, Alemano embodies the neat design of Michelotti. did. With a lightweight piston, equipped with a Weber 38DCOE carburetor and a twin tail muffler, the maximum output reached 142ps and the maximum speed reached 200km / h. The photo shows Carlo's personal car. The dark red interior with the body color red and tone is called his selection along with Campagnolo wheels. Currently owned by FCA's heritage department, this time I took a test ride of about 100m, but I was fascinated by the wonderful engine sound.

For example, the 1964 Fiat Abarth 2000 Coupe Pininfarina is a masterpiece that uses the rear engine layout to boldly show the powertrain and exhaust pipe. It is like a wedge shape pioneer, but this is a proposal from the Pininfarina side. Of course, it must be aimed at becoming a catalog model, but as Carlo finds the potential of Fiat's vehicles, Abarth vehicles pursuing speed were attractive for Carrozzeria to challenge new things. I think. It was also the achievement of Abarth that inspired the car makers, including the design. 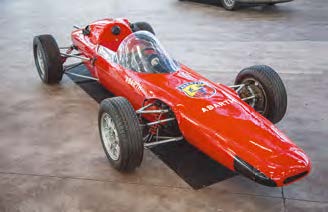 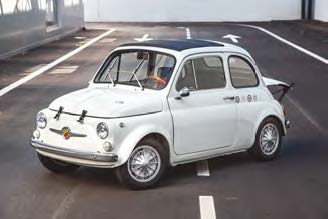 Fiat Abarth 1000 Monopost Recolt [1965]Mono post for speed record challenge competing in formula type. The base is 1000 Bialello. The twin plug engine was placed in the center of the tubular frame. Styling is Pininfarina that is strong against aerodynamics. Carlo, who decided on his own challenge, dropped his weight by 30kg to fit in the tight cockpit and set a new record.
Fiat 500 Abarth Series [since 1957]The Abarth version of the Fiat 500, which began in 1957, was the most popular model among boys racers in Italy in the 1960s along with the 600. Start with the original 3.5ps increase with the same displacement. In 1988, the 595/696 series debuted. A tuning kit was also released. The photo is 595 owned by FCA Heritage.

*
Since 1971, he was placed in Fiat's competition car division and engaged in the development of racing vehicles. , Litomo and very few. It seemed that he was also involved in the development of Ferrari and Maserati, but he became an unseen person. The long-awaited resurgence is in 2007. I clearly remember the day this news flowed, revived after being incorporated. The Italians were greeted with applause, but with joy, “I wonder what it is” was such public opinion. 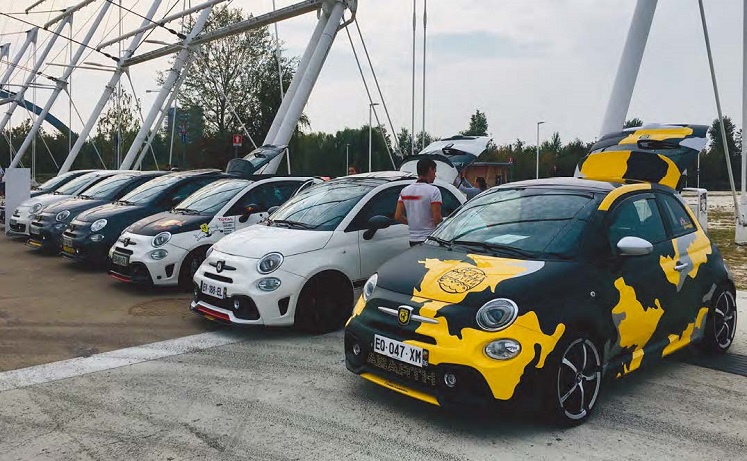 Only Abarth has many owners who produce individuality through coloring and wrapping. A modified version of the ABARTH letter on the front grille also stood out. The eye-catching part of the customization was the 500 with a gull-wing door. A wide variety from scorpion sticker-packed school to those that put in the color and put great effect.
*
I was deeply moved to see more than 3,500 Abarth vehicles at the venue. All of them are brought in by individual owners. Some of them must have been skeptical of "I wonder if it is true". Most of these vehicles are the current 500 models. This was also very emotional. There are very few vehicles that generations like me think are Abarth. When I asked the owner of the 595 Competizione with pierced ears and tattoos on his arms, he asked me, "What do you know about the old Abarth?" "Is there a stranger?"

“I think it is the strongest combination of 500 Abarth versions, modernized in time. The best way to run, sound and status,” asked the young man who said Abarth's appeal. "History of speed and detail traditions found in Marmitta and interiors"
*
It seemed to be flying away, and in fact it smiled as a young man from this country who was compliant with history and tradition. A popular DJ sings a rap on the stage set in the center of the venue. The owners who enjoy the present Abarth are all incredible. It was a very exciting 70th anniversary festival.

One that had an interesting history! AC ace, the first four-wheel independent suspension model made in the UK

Volkswagen up! Release of "Cross Up!"