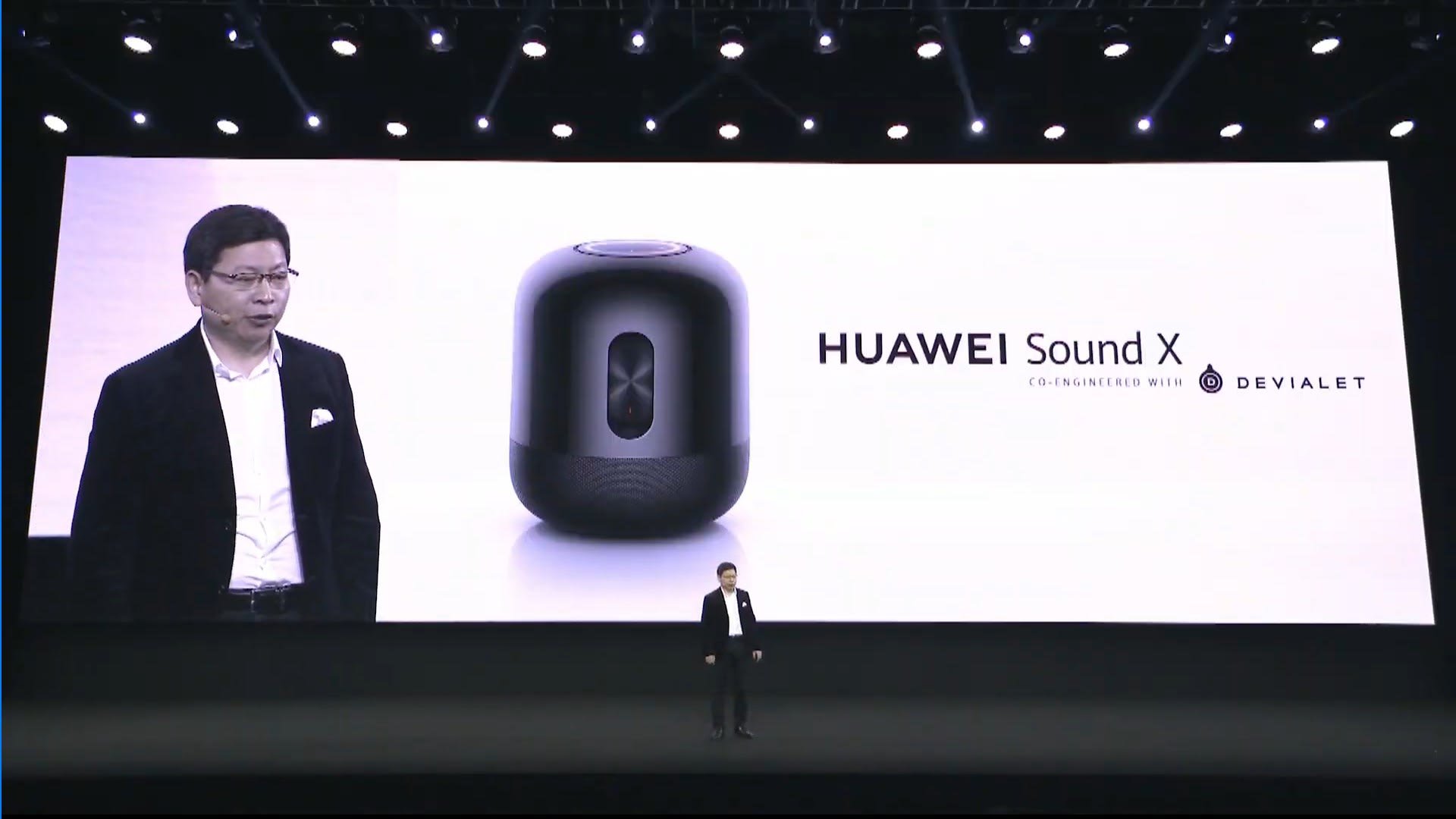 Huawei's new product launch also unveiled HUAWEI Sound X, a high-end smart speaker [Huawei calls it an "AI speaker"]. This is a model that packs the same specifications as high-end audio into the cylindrical body of Apple's HomePod.

The release date is currently closed. Pricing was also undisclosed at the launch, but in regions where it was sold earlier, it was around $ 320- $ 350. 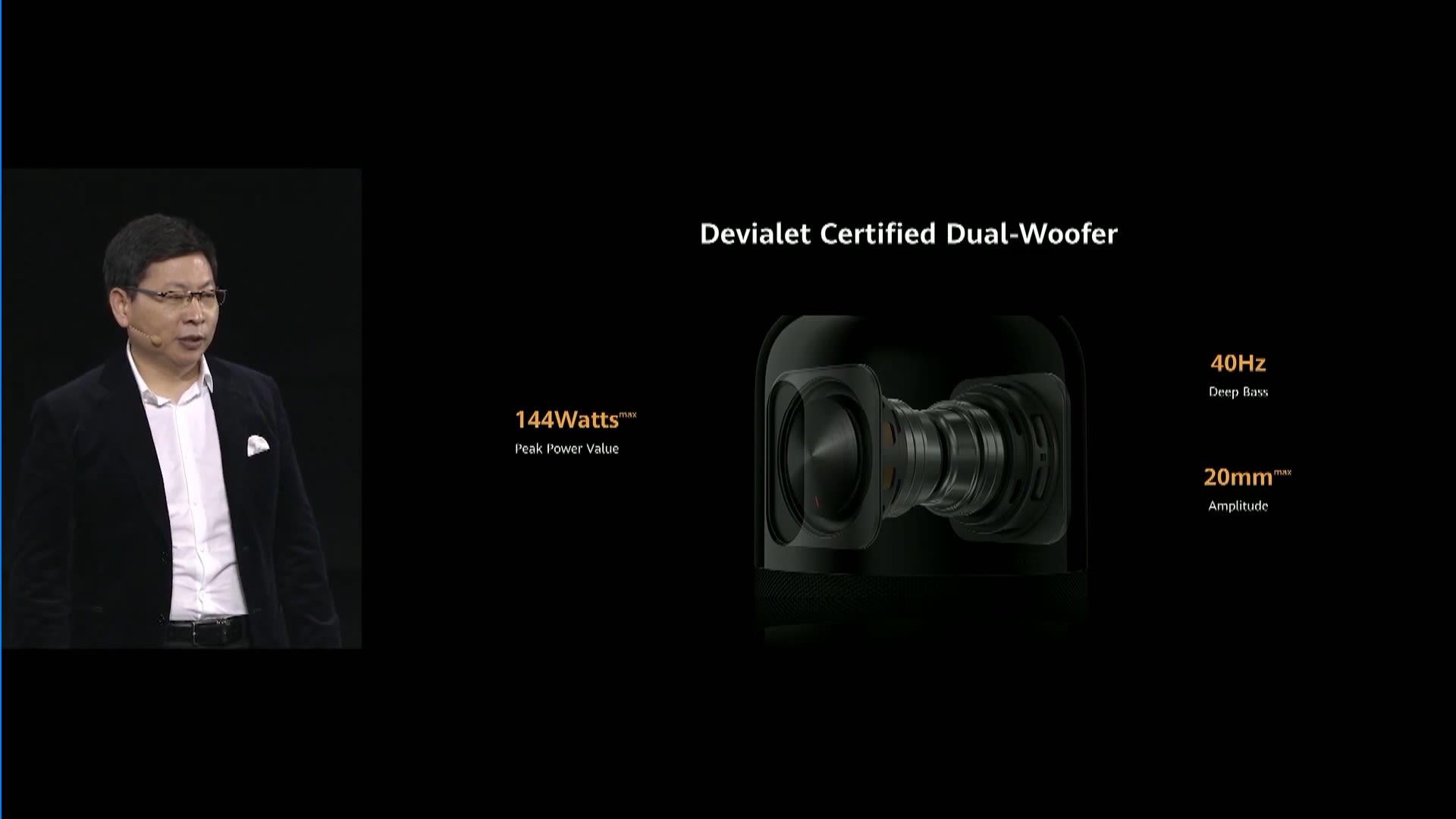 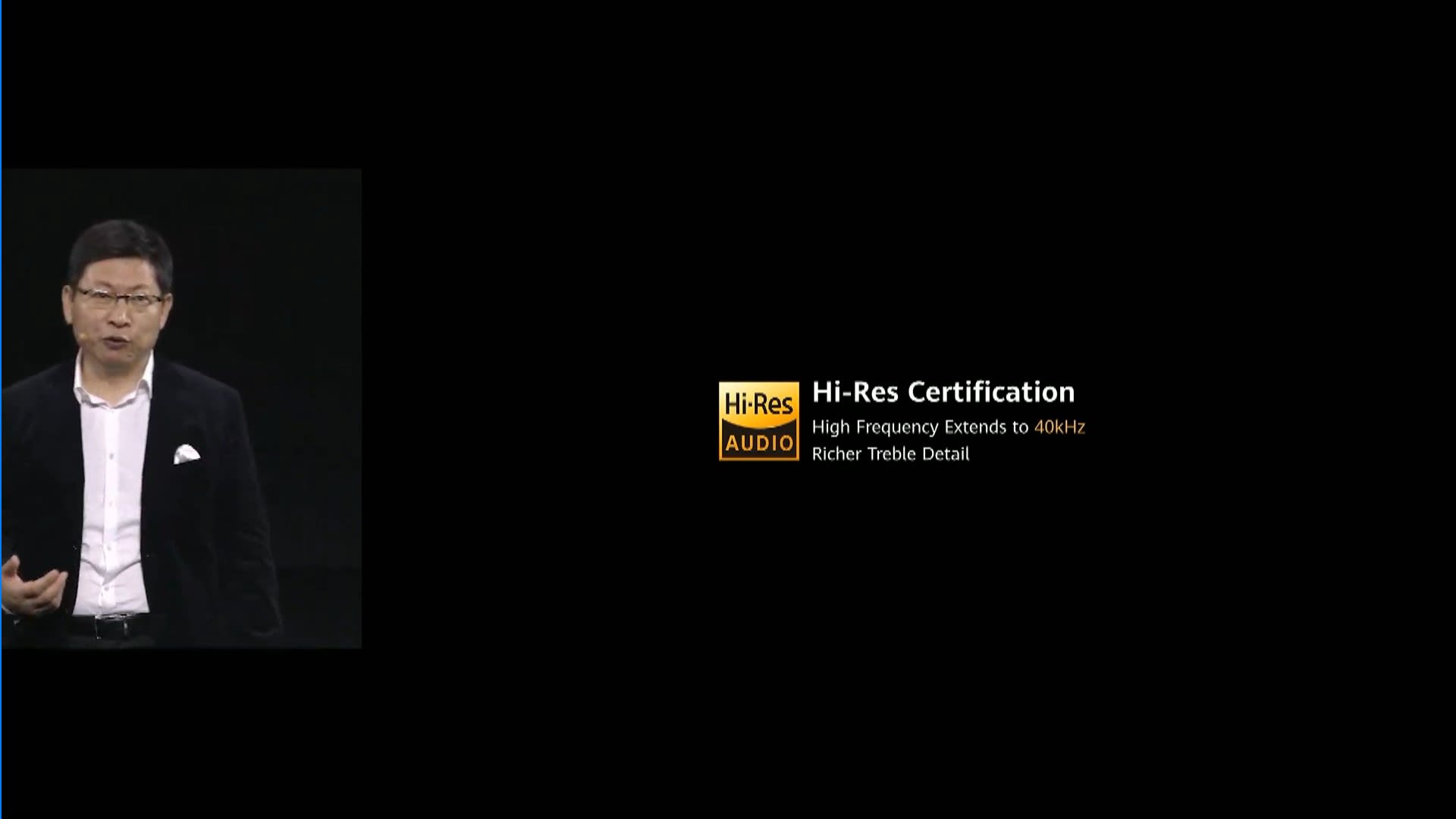 The feature is that the basic performance as a speaker is high. The nominal low-frequency response is excellent, from 40Hz, with a maximum output of 144W and a maximum sound pressure of 93dB, which is also on par with high-end audio. The treble side is nominally compatible with 40kHz playback and has a high res audio certification logo.

These are realized by collaboration with French manufacturer "DEVIALET" [Deviare], which is attracting attention for high-quality active speakers. 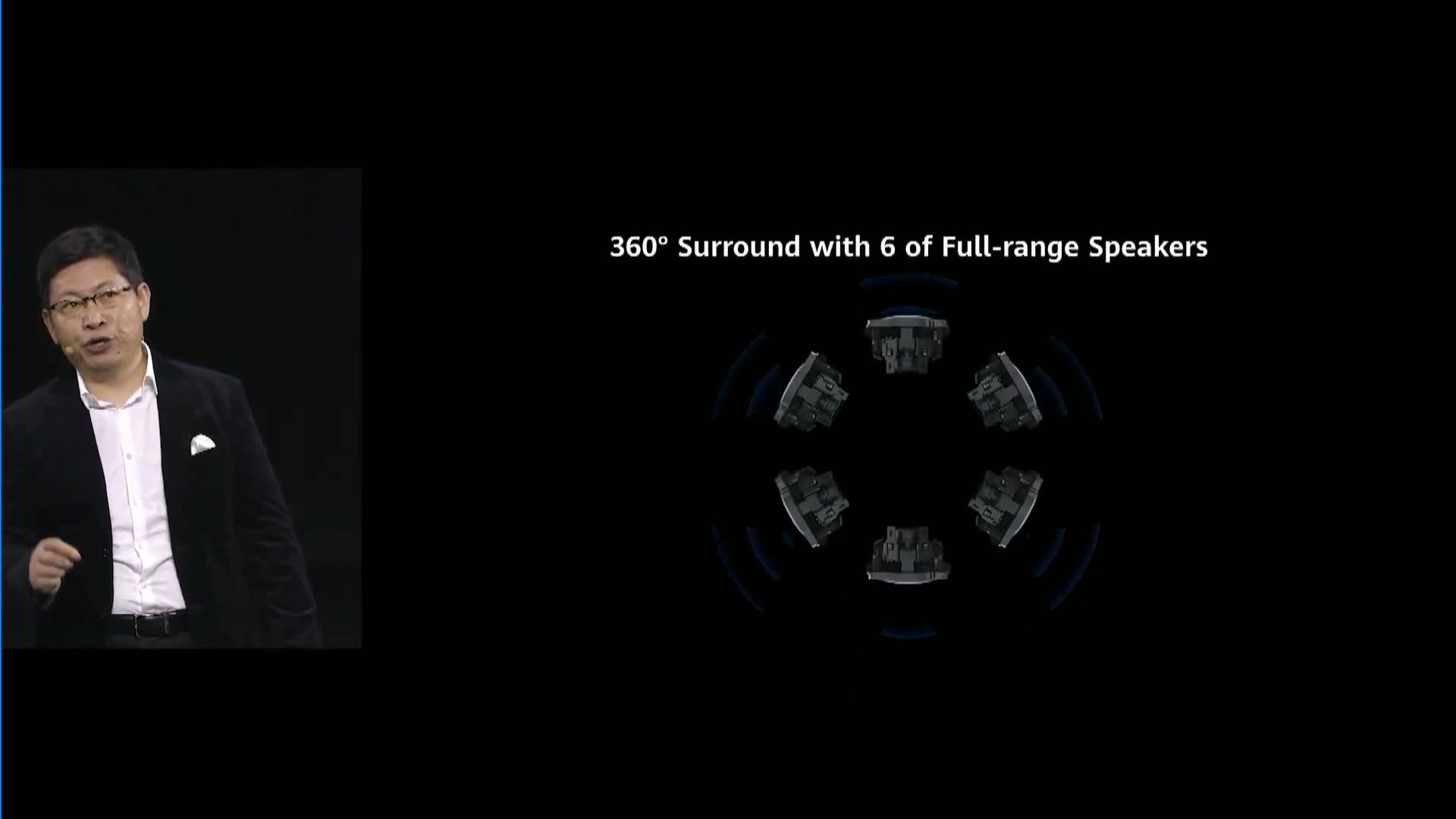 The speaker unit consists of six full-range speakers with medium and high pitches arranged circumferentially on the bottom side, and two woofers for low-pitched sounds [for bass reproduction]. This arrangement is also a type that “emits a sound field all around” and can be called a homepod-like aim [of course, smart speakers often have this type].

The key point is the woofer, which has two units facing outward, and adopts a “Push-Push system” with their backs facing each other. This is the layout that Devialet uses for its own high-end speakers.

In addition, Deviale's specialty in "Speaker Active Matching" [SAM] technology is used to match the characteristics of the amplifier. It declares elements that degrade sound quality such as so-called impedance characteristics and time alignment mismatch, as well as speaker drive that takes into account extra vibration of the exterior. 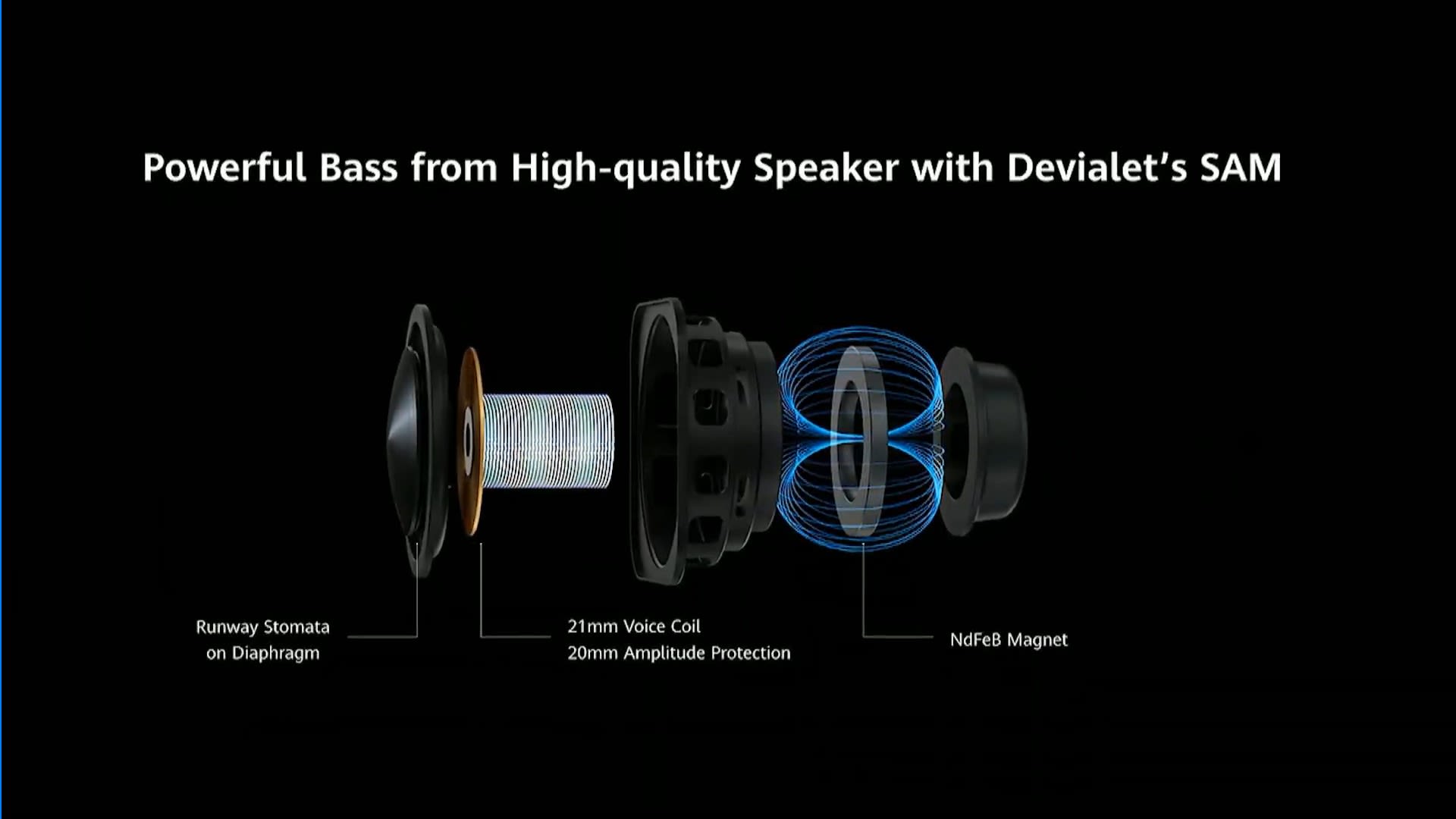 The unit itself is also a specification of "Deviale's speaker direct line". The unit has a stroke of only 20mm to receive the large output. In addition, the amplitude side width of the voice coil is 21mm, and the important magnets are neodymium [Nd-Fe-B] type, which are exceptional specifications that do not seem to come out with smart speakers in a good sense.

The body size is 165mm in diameter x 203mm in height and weighs about 3.5kg. It is the size of this size [small for a full-fledged speaker] that has the characteristics of high-end audio as described above.

The HomePod's body size is 142mm in diameter x 172mm in height, and weighs about 2.5kg. This machine is one size larger and heavier. 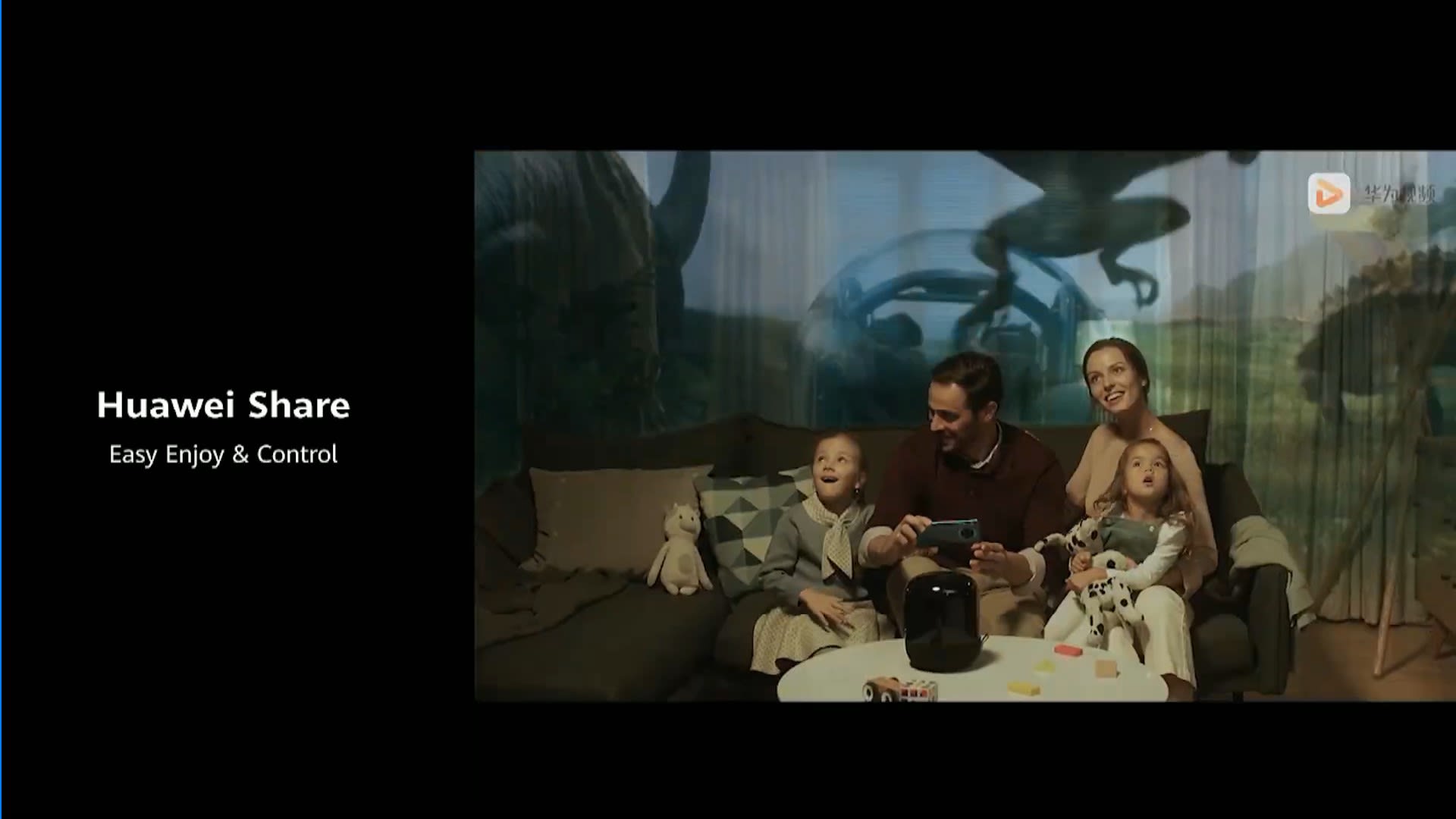 The smart speaker element released in the presentation is equipped with "HUAWEI Share". This is software that can be used in conjunction with HUAWEI's smartphones and tablets and HUAWEI Vision [although not yet released in Japan].

In the video at the recital, usage examples such as automatically switching the audio output to the unit side by placing the company's smartphone on the top of this unit … are disclosed. 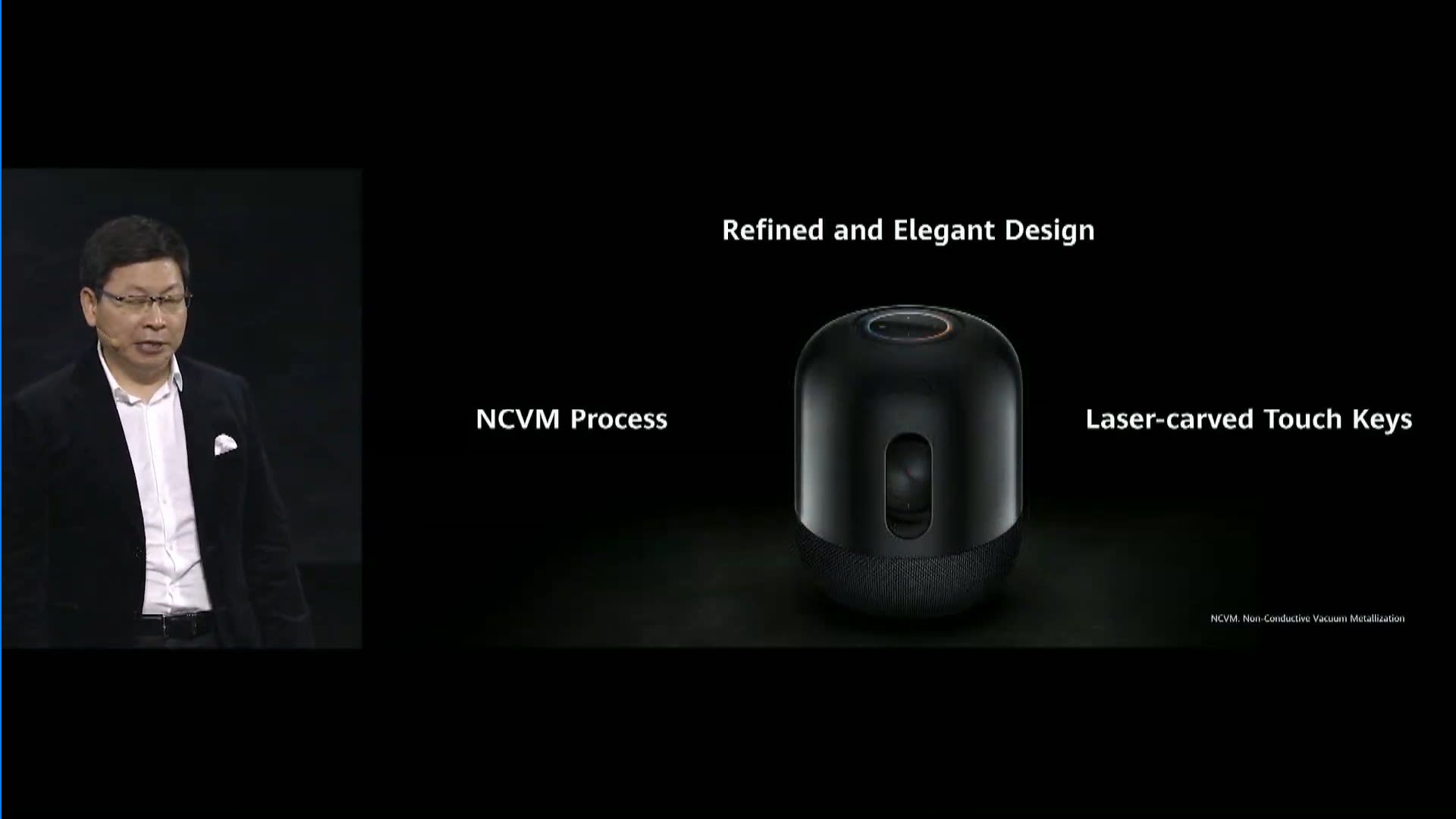 The exterior is also very elaborate to match the audio quality. Starting with the faint light of the top button of the basic operation [this is also HomePod-like], the non-conductive vacuum deposition [NCVM] process is introduced to the metal part. It is made by multiplying. 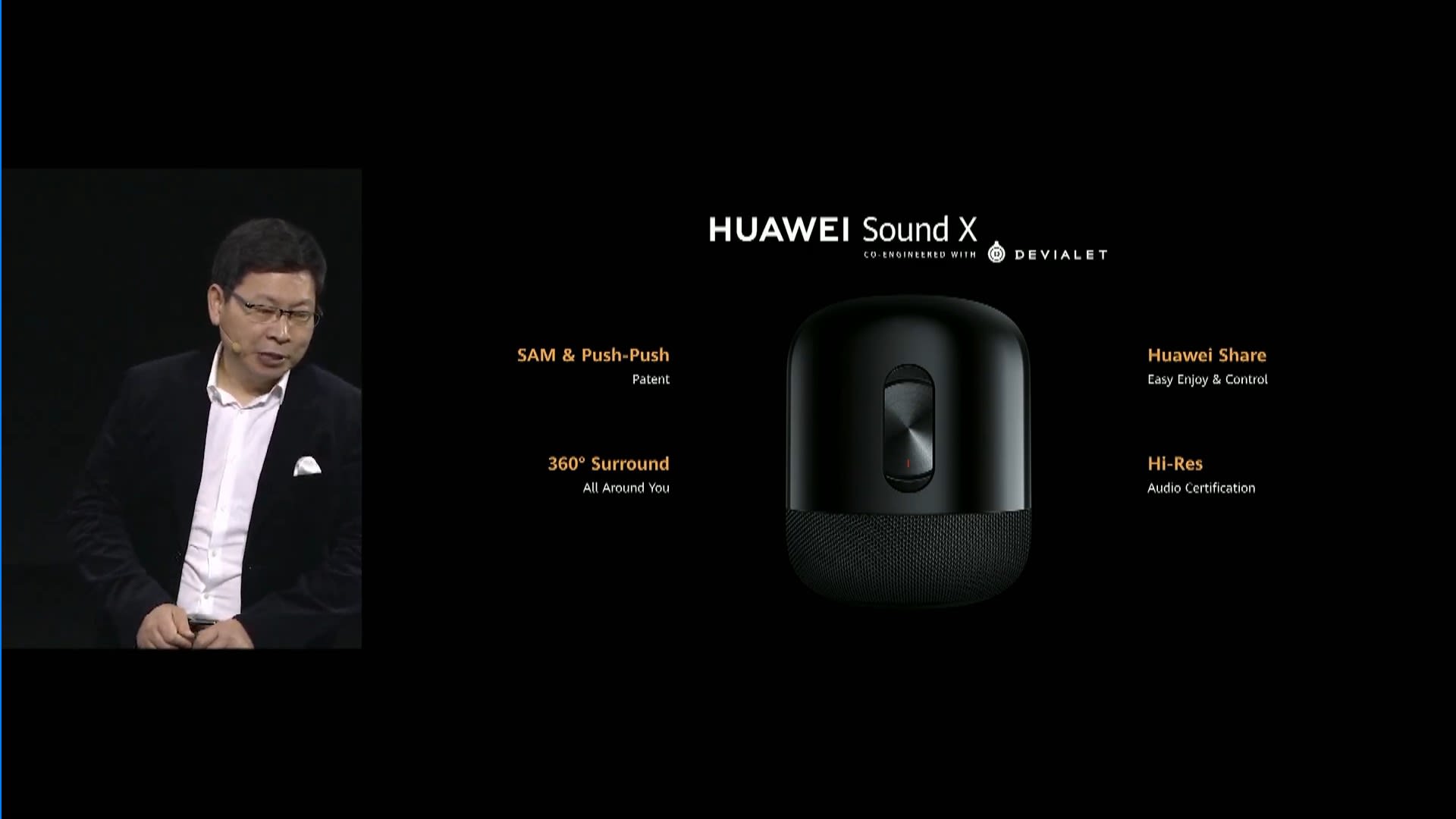 In this way, HUAWEI Sound X is a model that is positioned as the top class in terms of price as a smart speaker, but has specifications comparable to high-end audio …

In recent years, Huawei has been receiving attention from heavy users with earphones such as “ HUAWEI FreeBuds 3 '' with “ open but active noise canceling '' specification and “ HUAWEI FreeBuds 3 '' with noticeable sound quality, but under such circumstances Deviale Inc. And [from the hardware level rather than the so-called sound supervision level] to release a model with a gutsy … It is a very interesting place.

In other words, this unit is likely to be a model that Huawei can gain a certain level of support as an audio maker. I personally would be very interested if the sound of Deviale can be experienced in about one-fifth of the original family. [Deviale speakers available in Japan are at the lowest price of 159,000 yen. is].