All posted photos are enlarged by clicking. Price includes tax and all release months are planned. This time, please note that there may be changes to the launch due to the new coronavirus infection.

A new model appears in a flat black case with a metallic texture and digital camo pattern. Based on the five iconic G-SHOCK standard models, we design dials that make use of each character.

LCD characters and hands, G-SHOCK logo, large front buttons, etc. were announced this timeG-SHOCK sports modelFluorescent yellow is also used for accents. All models have inverted LCD specifications to enhance the contrast. The functions and specifications are the same as the base model.

Cool and pop and a little nostalgic. Color Skeleton series

A color model that uses a well-developed fluorescent color as a popular skeleton material has appeared. The base model is the G-SHOCK standard third model "DW-6900", the square model "DW-5600" which inherits the origin of the origin, and "GA-110" which represents the big case G-SHOCK.

"DW-6900LS" is a light-collecting material, and "DW-5600LS" is a metallic plate. "GA-110LS" arranges fluorescent color on the needle and in dial ring. The combination with the case color gives a sporty impression. It is a cool and pop G-SHOCK like spring and summer that makes a little nostalgic skeleton material turn around and feel fresh.

The impact color is also the best of G-SHOCK! Psychedelic Multi Colors

A colorful multicolor model that stimulates the mind of summer outdoors and activities has appeared. Based on the third model of the octagon "DW-5900", there are two models [12,100 yen each] with the theme of a neon color that colors the night.

The use of a slightly more impact color makes the model re-recognizable as a G-SHOCK eighteenth. Released in June.

A model with a pale pearl tone that makes you feel spring appears. The base model is the basic square model "DW-5600" that inherits the design of the origin. Available in three different color models, light blue [DW-5600SC-2JF] and pink [DW-5600SC-4JF] are finished in simple two-tone, and gray [DW-5600SC-8JF] are finished in multicolor. The color of the EL backlight is blue green. Specifications and functions are the same as the base model.

Despite the feminine colors used in spring, it is perfect for women who want a slightly different claim from BABY-G. Recommended for new school students! The price goes on sale in April for 13,200 yen each.

Digital watch pursuing ultimate toughness, such as equipped with a triple sensor Ver.3 that measures azimuth, atmospheric pressure / temperature, altitude at high speed and high accuracy, and equipped with a large button with a knurled cylinder structure,G-SHOCK MASTER OF G RANGEMAN [GW-9400]. Based on this as a base model, special specifications that collaborated with the emergency firefighting aid teamGW-9400NFST-1AJR]Appears.

Based on black, the base color of fire-fighting clothing from the Sendai City Fire Bureau, a red color scheme is used to image the firefighting vehicle group of the emergency fire brigade. The colors match the G-SHOCK brand color and yellow, which is used as a reflective material in fire protection clothing.

When the backlight is used, the logo of the Emergency Fire Services Corps, which resembles a carabiner used during activities, appears. The band was engraved with rescue equipment ropes, and the SS ring was stamped with an emergency fire brigade. The back cover and package express the passion and pride of the members in every detail, including the design of the Kobe City Fire Bureau and the Sendai City Fire Bureau's fire emblem.

Other functions and specifications are the same as the base model. The price is 55,000 yen, released in June.

Huh! Legendary star Bruce Lee [Li Xiaolong], who is familiar with the shouts and is a martial artist but has many faces including actors and screenwriters. The signature model, the MR-G "MRG-G2000BL-9AJR", commemorating the 80th anniversary of its birth will appear.

The highest peak of G-SHOCK equipped with GPS hybrid radio solar with Bluetooth “MRG-G2000Is the base model. The index features the emblem of Seokundo, founded by Bruce Lee, and the bezel and back cover have the slogan “Illegal lawless infinitely finite” [lawlessly legal and legal]. , Finite with infinity] is engraved.

The strap is a vivid yellow that resembles the tracksuit of the movie "Death Yugi", which was released in 1978 and became his last work. Comes with a special case. The price is 440,000 yen and will be released in March [many cases have already completed store reservations].

One is the "GG-B100BA-1AJR", which was designed under the official supervision of the British Army "British Army". Khaki and camouflage patterns used in British Army uniforms are designed for the case and band. The ring and package have a British Army emblem printed with a crown and sword.

The other is "GG-B100BTN-1AJR", which has been collaborated with the top brand "BURTON" [Bulton], which has received great support from snowboarders around the world.

This is the fourth collaboration model with BURTON. This time, it is assumed to be used in the backcountry gliding in nature. The pattern of the band is "tree duck" with a snowy mountain motif. The "BURTON" logo has been placed on the Yukan and special packages.

The GG-B100 withstands the harsh environment of muddy water, sand, snow, and below freezing, and has a location indicator that shows the direction and distance to the destination, and is perfect for both collaboration partners in terms of performance and image. The price is 57,200 yen for both, "GG-B100BA-1AJR" is released in April, and "GG-B100BTN-1AJR" is released in March.

A model designed by Chinese artist Chen Yingjie. Chen has presented works based on the concept of oriental ink painting and western street art. The common concept of the two models announced this time is "Formless" Tai Chi. Formless is "thing without shape". And Tai Chi is "change" and "flow of time." It is a Chinese philosophy that also governs the concept of the cosmic system.

Mr. Chen expressed this "changes created by the flow of time due to the natural change and discipline of everything" using black IP and proprietary printing technology. Other functions and performance are based on the base model “MTG-B1000”And“ GST-B200 ”. 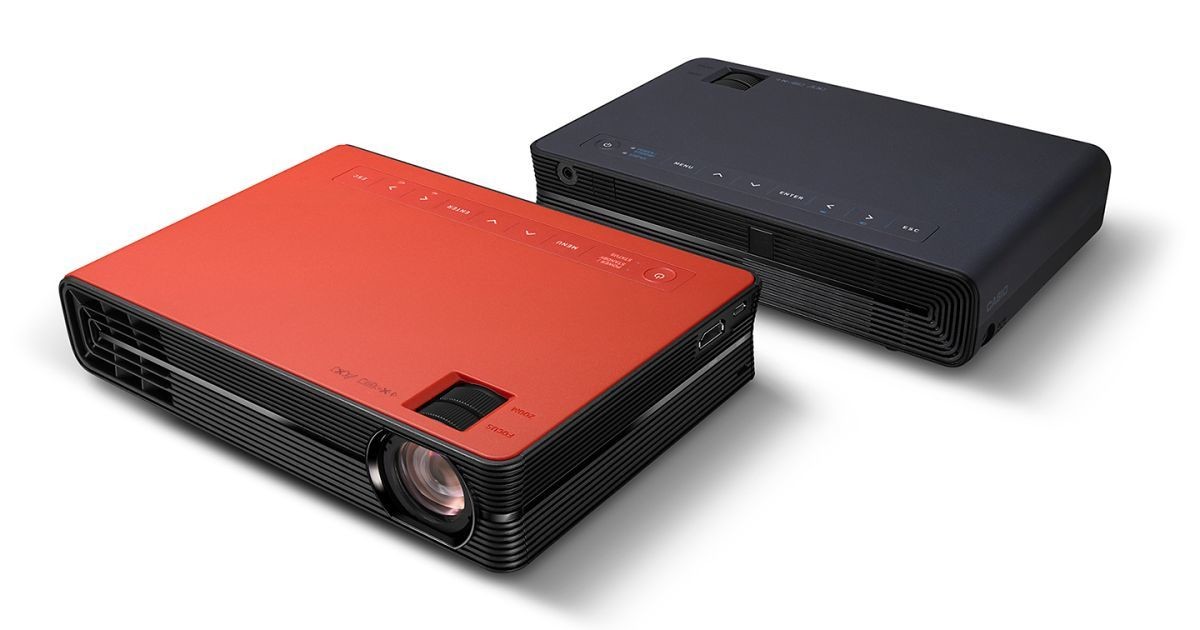 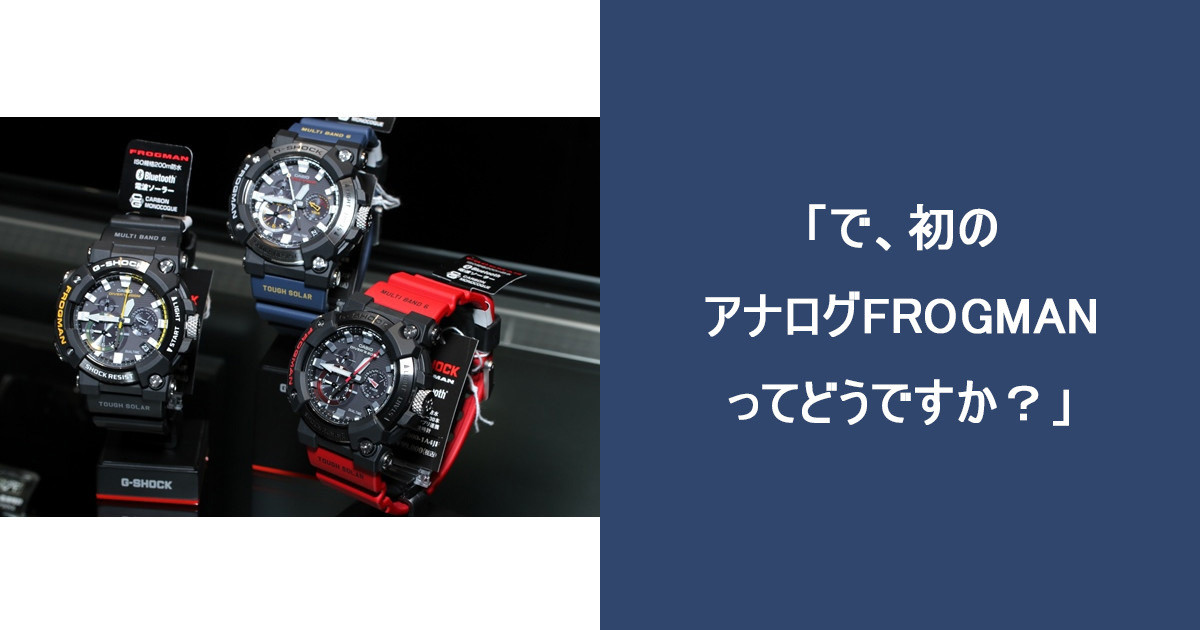 Listen at the G-SHOCK concept shop "EDGE"-"What about the first analog FROGMAN?" 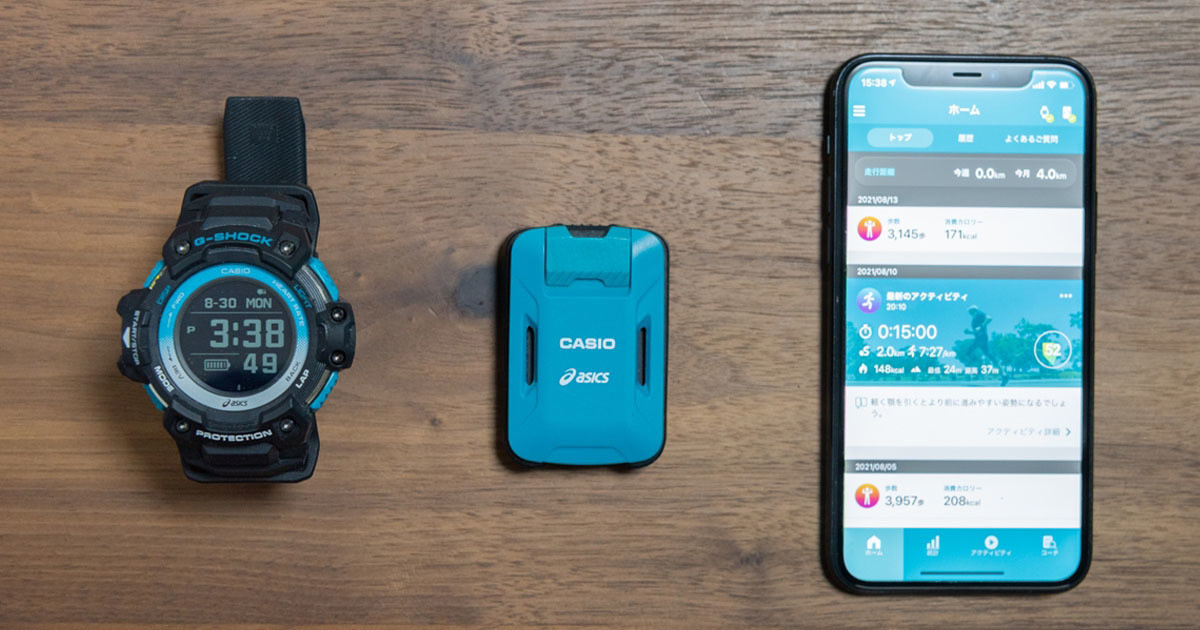 Beginners and advanced runners have tried Runmetrix for two and a half months-what is the power of the personal coaching app for runners jointly developed by Casio Computer and ASICS? 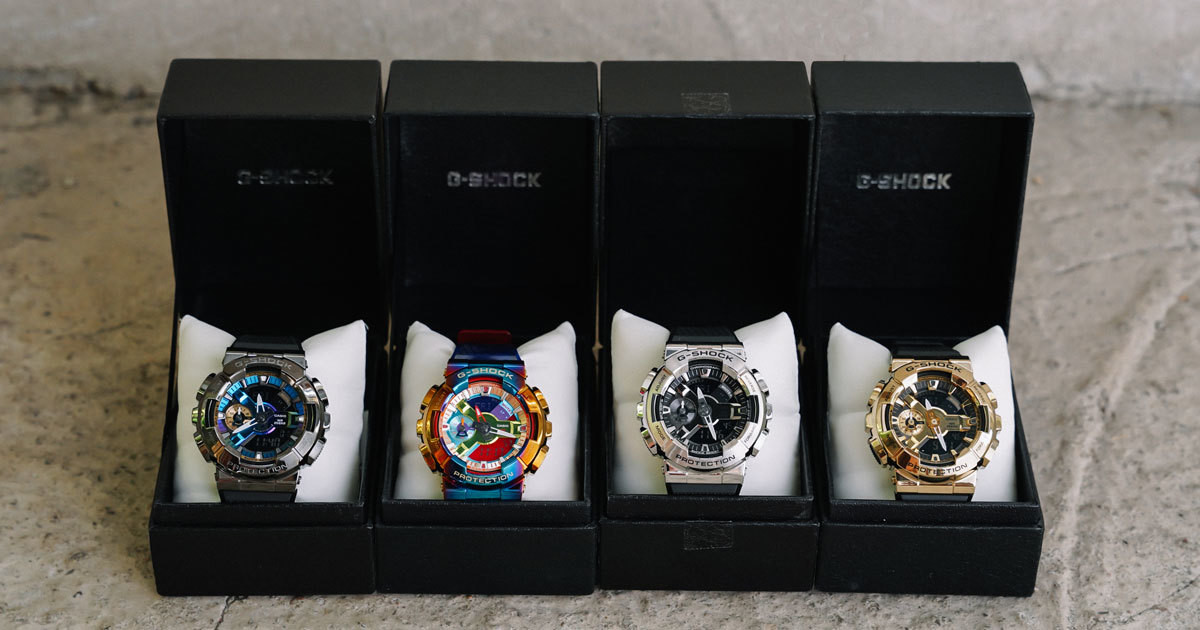 I want to practice this fall! Recommended Men's Coordination-The point is the new G-SHOCK "GM-110" series 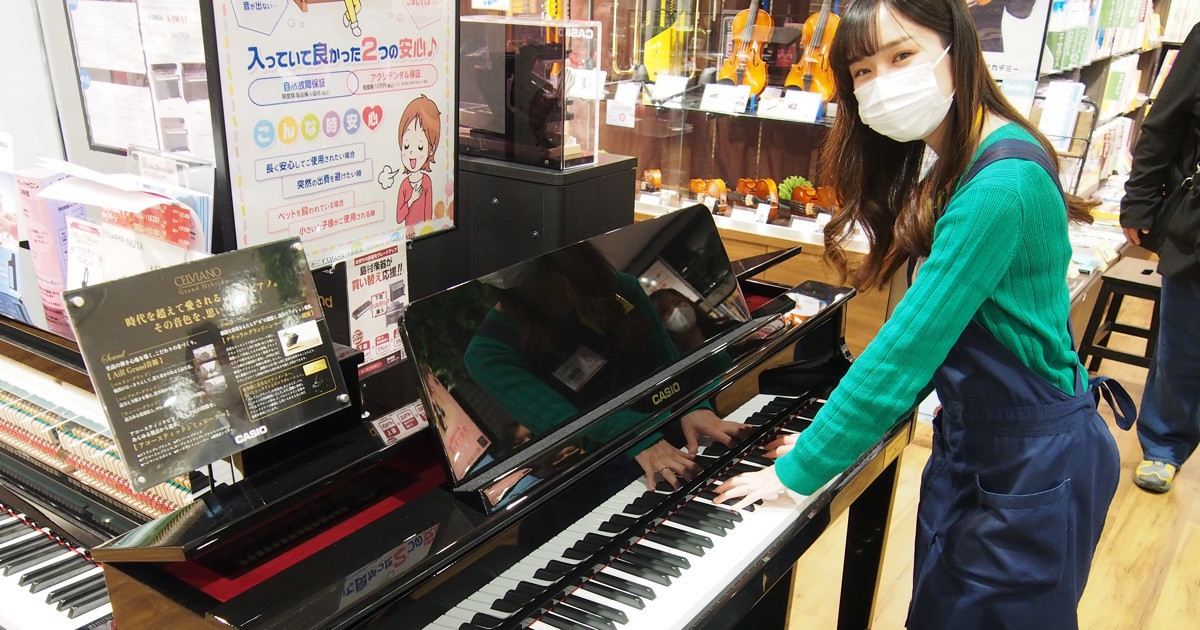 Why don't you start playing the piano? –The clerk of Shimamura Music teaches you how to choose an ever-evolving electronic piano! 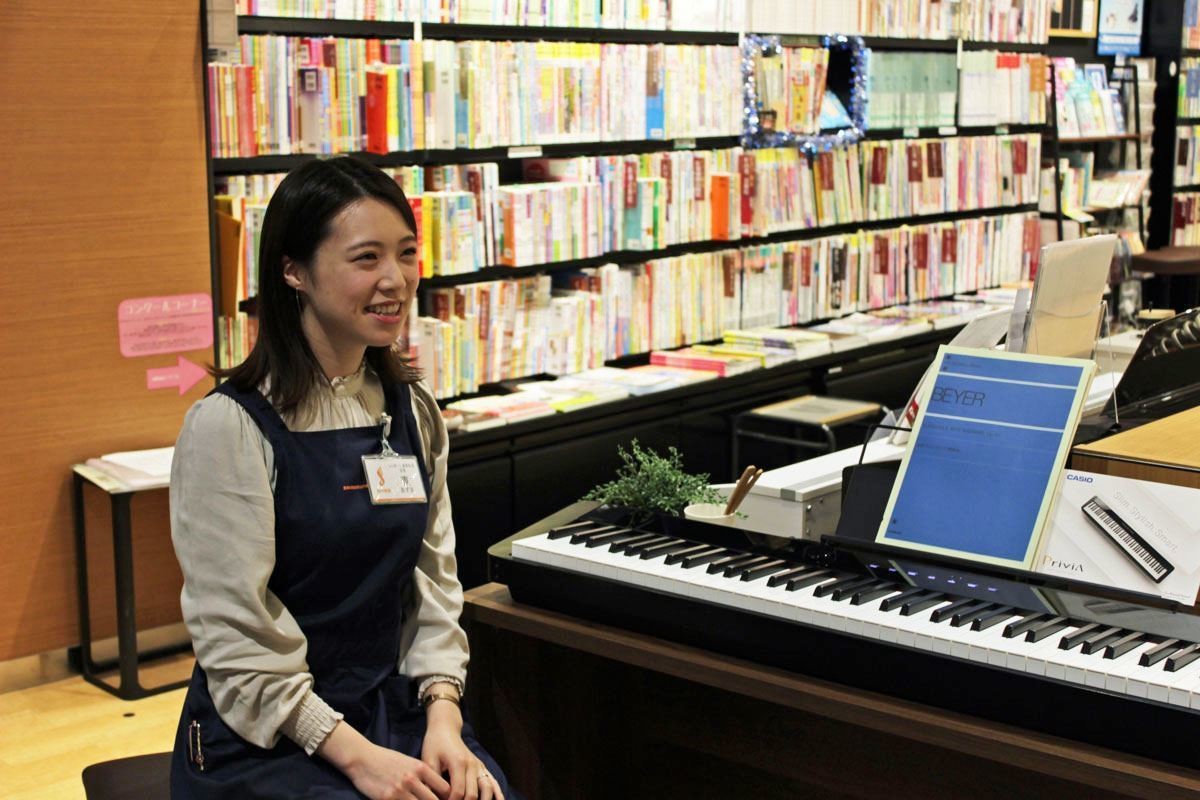 Shimamura Musical Instrument talks about the popular electronic piano with Bluetooth, despite its compact size and piano performance.