Even if you say that it's the pinnacle or the supreme, it's not enough to express the aggressive spirit of the brand. Yes, MR-G is a solitary being at an overwhelming height.

EverTsuiki,Rough hammer,FileJapanese traditional techniques are actively adopted. Its precious exterior processing techniques, combined with Casio's shock-resistant structure and cutting-edge electronics, have shown us a number of watch-like arts. The latest work of such MR-GMRG-B2000SH-5AJR" Nicknamed "Shock Maru." The price is 880,000 yen [tax included]. Scheduled to be released in July with 400 pieces worldwide.

For detailed information such as functions and specifications, see another articleG-SHOCK "MR-G", 2020 special model is a helmet motif "Shock Maru"Here, let's take a closer look at the appearance and details in the photos.

The design concept of the MRG-B2000SH-5AJR is "the pride and aesthetics of the warlords." According to the Obunsha Standard Japanese Dictionary, pride is "pride that you believe is superior." To express this, a number of special techniques using motifs of helmets and armor from the Warring States period are applied by craftsmen who are said to be masters of the road.

First, "iron rust" [Tetsubashi]. The case and band made of titanium material are forged and shaped to create fine irregularities, which are then deep-hardened. After applying brown IP and blue IP [two layers], remove only the upper blue IP coating. As a result, a slight blue remains only in the dents, creating a taste as if it were really corroded by iron rust.

The color tone of the Blue IP is inspired by Konito Odoshi, which is used for armor. The forging was done by Masanao Kikuchi, the fifteenth generation of Kikuchi Hojudo, founded in 1604 as the founder of the castle of Yamagata Castle.

On the bezel, "Ryumon" is carved by hand on the diagonal line of the iron rust. This is by Mr. Masao Kobayashi, the third generation of the encyclopedia from the grandfather's generation in Otsu City, Shiga Prefecture. The ruggedness, delicateness, and momentum of the iron rust and dragon crest that combine only the handwork. Its color is also quoted in metallic blue, such as the second hand, in-dial, and the ring inside the bezel.

The dial is lined with the traditional Japanese pattern "triangle scale". Scales are scales of dragons and snakes even though they are scales, and are often used in the sense of evil. I think that it is a wonderful design work that semantically pairs with the bezel dragon crest while taking advantage of the features of the MRG-B2000, which allows for a highly flexible dial design by adopting the in-dial solar.

The "MRG-B2000" is a new model, so let's touch on the base layout a bit. The time adjustment function of the MRG-B2000 is a mobile link linked with a smartphone via Bluetooth and a radio clock that supports multi-band 6, and the time information acquisition function using GPS satellites has been eliminated. The dial layout has also changed significantly, such as eliminating the need for GPS radio gauges and city code disc needles.

At 3 o'clock, the in-dial functioned as a day and mode display, world time at 8 o'clock, and a 24-hour counter at 10 o'clock. For personal tastes, I think that the arrangement was beautiful and functional. Along with this, the logo of MR-G has been changed to the 12 o'clock position [3 o'clock position on the MRG-G2000].

It weighs 150g and feels a bit heavy given the titanium material. However, the reason why you don't notice much when you put it on your arm is probably because the weight is due to the forged back. Because the mass balance comes to the arm side [the load does not turn outward when swinging the arm], it does not feel as heavy as the numerical value. Besides, the high-grade texture of this forged bag has the joy of making it look rather good.

New peak of G-SHOCK, MRG-B2000SH-5AJR "Shock Maru". I want to wear it with the pride and aesthetic of a military commander who survives modern society. 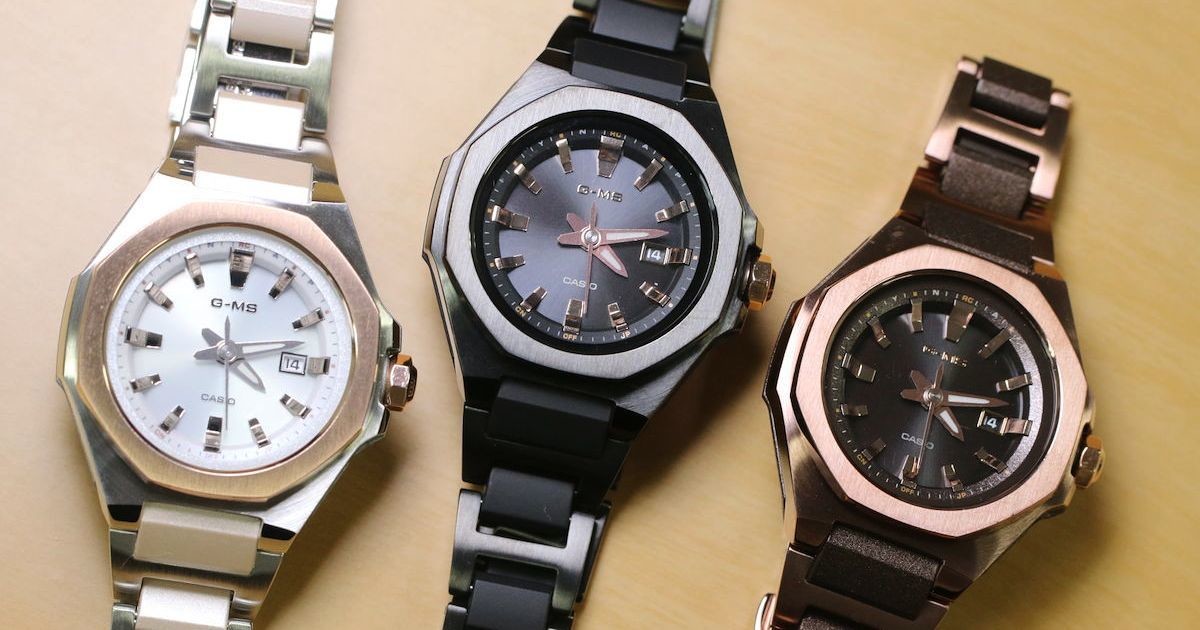 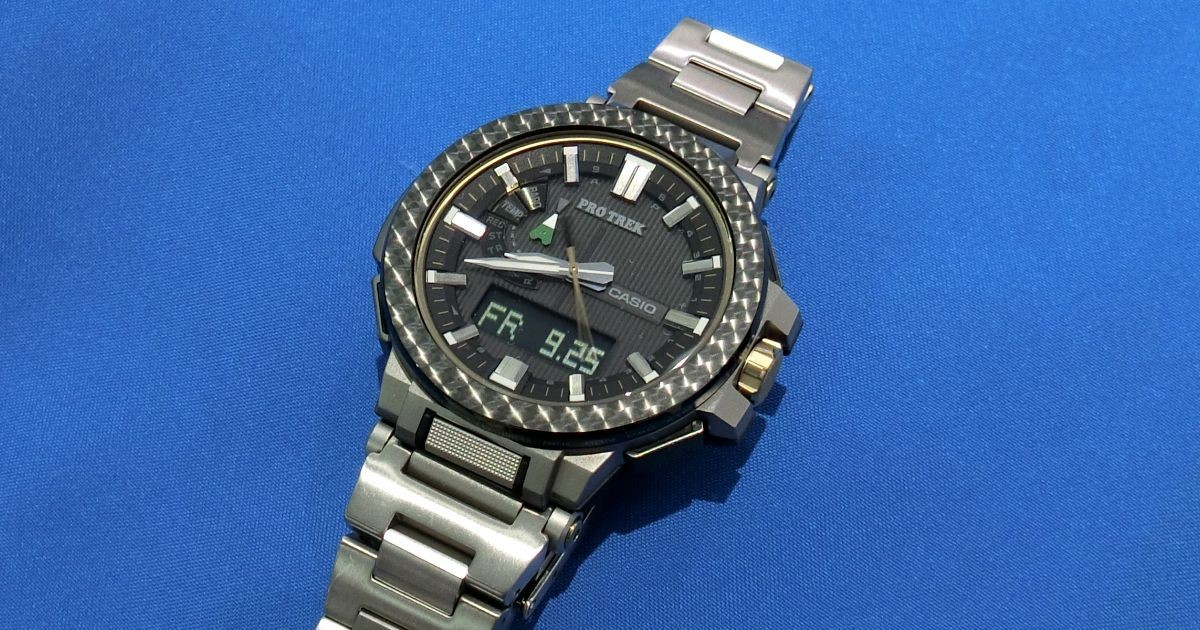 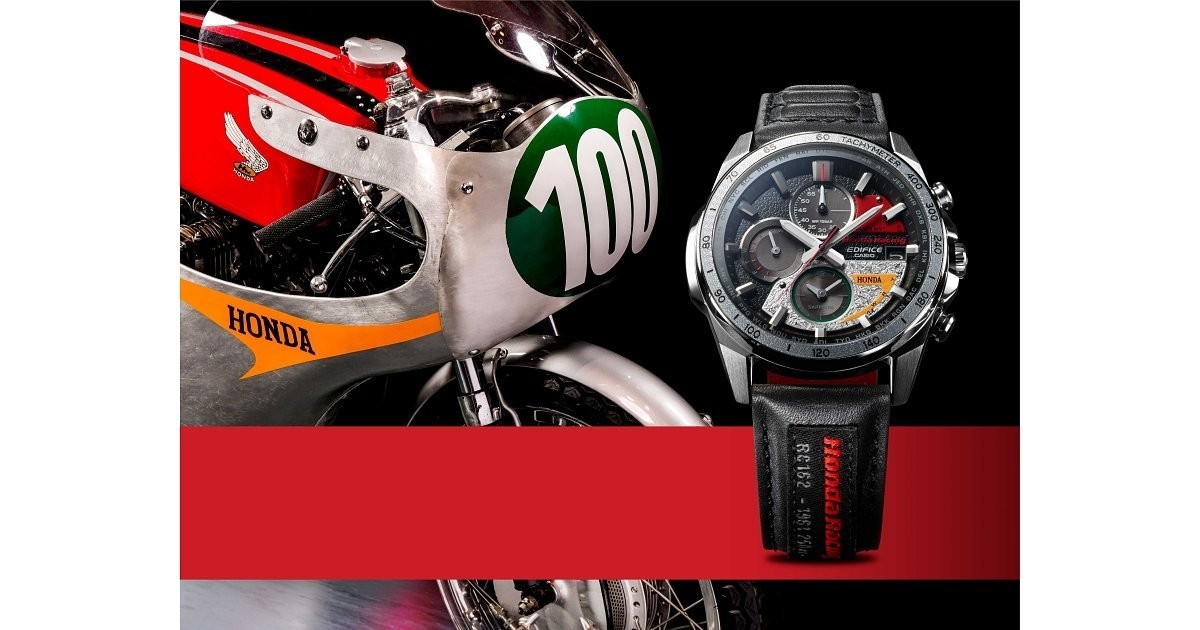 Casio "EDIFICE" with the motif of Honda's legendary machine "RC162"