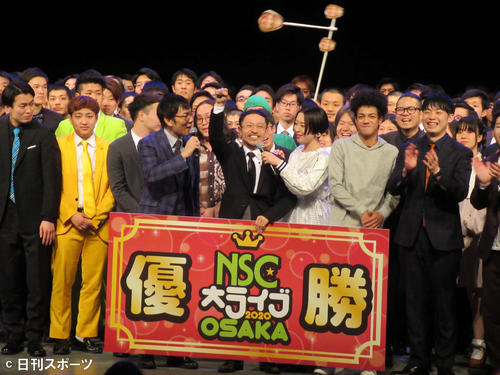 Monden showed off three stories in the final. At the end, he won the championship, wearing sunglasses in a suit and saying “Get it back”. "I prepared something that I could win. This is the result of my hard work for one year.

Born in Hiroshima and graduated from Tokyo NSC five years ago. He had been an entertainer for one year, but quit, and had been working for a salaryman for three years. I wanted to come back and come back to NSC in Osaka.

We challenged this year's R-1 as well, and lost in the second round. "I was sorry I didn't win the prize race," he recalled. When asked about his future goals, he said, "I will be in the R-1 final. I want to make stories that aim for the victory, and I want to be on the story program because it's the" entertainment god "generation."

After the championship, he will perform at the all-night live at Namba Grand Kagetsu in Osaka, and will also appear on the Yomiuri TV "Saturday is bad!" [4pm Saturday = Kansai Local].

Utsunomiya Maki [39], who hosted the final, commented that Monden's face was similar to Katsura Katsura [64] appearing in the program, and the atmosphere was similar to Yoshimoto Shinki's Katsunori Uchiba [59]. Monden laughed, saying, "I'm glad I've been told you're similar to TEAM @ NACS's Togetsu [Shigeyuki], and I've been a bit nervous about watching the movie." Utsunomiya solicited, "You must be a new comedy.

Goe Asakoshi [46], also the moderator, praised, "I felt like I was sweating in making the story. The composition of the story was not wrong, and it was noticeable if I made one mistake. That is amazing." Last year's champion, rugby entertainer Shinya [29], revealed that Monden was taking the NSC class in the front seat.

Monden said during the event that the suspension of the event was continuing due to the spread of the new coronavirus, "I was a little worried, but it's Yoshimoto. Employees have prepared for the prevention."

GLAY: The first show of Yokohama Arena live in January on WOWOW in May on TV …