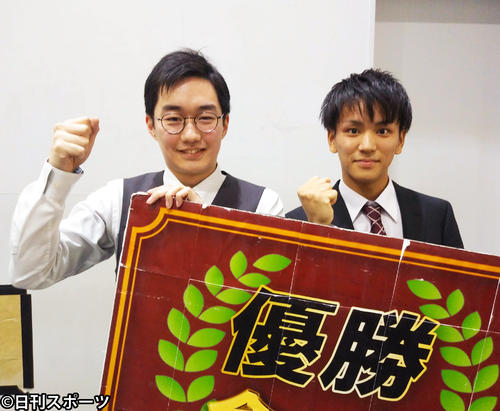 The “University Student M-1 Grand Prix 2019” final, which determines the best in Japan, was held at the Waseda Toyama Campus, Tokyo on the 14th. Tsukkomi's Takahashi Sea is a laughter problem, and the blurring Oshima power is a fan of A Masso. “I want to be a professional in the future,” he smiled. Hosted by the Waseda University Broadcasting Society, this year marks the 16th time.

Fifteen teams out of 211 teams nationwide competed for victory. In the survival stage where eight teams competed for the revival of the loser, CRT babes beat the case-by-case, Scorpion, Yayoi Cat, Chinchiro, fresh power, Yukuka Hanonagare, and Shout Shinnpo.

Three pairs of Mozart's second-ranked Den-O and third-ranked Mokutenu fought for the final. Mozanlation laughed at the TV program “Fleeing” and collected 4 votes out of 5 judges and won.