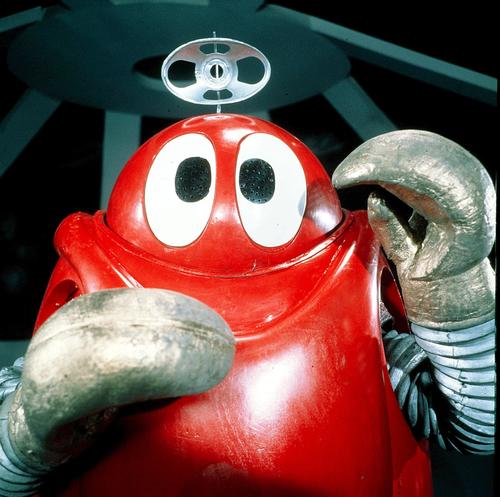 The manga artist Shotaro Ishinomori was in charge of the original work, and the special effects drama "Robocon" broadcasted twice on TV Asahi in 1974 (Showa 49) and 1999 was revived for the first time in 20 years and will be made into a movie I understood. The title is "Ganbare Iwa! Robocon" (directed by Hidenori Ishida), and the release date was decided on July 31.

“Robocon” was broadcast on TV Asahi from 118 October, 1974 to 25 March, 77, with 118 episodes of “Gobbare !! A robot with a red egg-shaped body and adorable eyes featuring a lovable eye "Robocon," a story that grows from a Doji G-class robot while being dispatched to human society from a robot school and working. Together with the "Super Sentai Series" and "Kamen Rider" born around the same time, it was popular among children, with a maximum audience rating of 29.2%.

In 1999 (Heisei 11), the second installment of "Ganbare !!-" remodeled in a modern style, "Fire! Robocon" was broadcast on the station from January to January 23, 2000, for a total of 51 episodes. . On December 10, 1999, a special-effects video movie “Burning !! Robocon vs. Ganbare !! Robocon” co-starring new and old Robocons was produced and released.

For the production of "Ganbare Rei! Robocon", director Hidenori Ishida and "Writer Yoshio Urasawa" who worked on "Burning!" Were re-tagged for the first time in 20 years. Director Ishida was the director of "Heat !!!!" under the name of "Hide I", and has worked on numerous works in the "Heisei Kamen Rider" series. Mr. Urasawa has also worked on special effects such as the "Super Sentai" series, including the masterpiece "Mysterious Comedy" series, as well as animation works for children such as "Nintama Rantaro" and "Crayon Shin-chan".

The title "Ganbare Rei !! Robocon" is to express the gag as a comedy work by applying "Ganbare" produced by Director Ishida and Mr. Urasawa in the Heisei era and a new era "Reiwa". Thought was put. The generation who saw the first "Ganbare !!-" became a parent, and "Burning!-" Became popular as a work to be seen by children and two generations. After these two works, "Ganbare Rei !!" is aimed at mobilizing three or four generations as a new "Robocon" that has run through Showa, Heisei and Reiwa in three eras with consistent gag sense.

Producer Shinichiro Shirakura inquired about "Kamen Rider Zero One", which is being broadcast as the first "Masked Rider" series work in Reiwa, and said, "Masked Rider Zero One, which depicts the world of work robots, is just the cornerstone of reviving robot control. The age was exactly 1.0 (ray) and 0 (wa). I aim for a perfect score of 100 points with Robo guts. Good luck!

It has been decided that "Gobbarei !! Robocon" will be shown nationwide, including the MX4D, which moves the seats and directs movies with smells and water.

B. Irish confession: “I committed suicide” in the shadow of fame

CASIOPEA 3rd: A special line to conclude the 40th anniversary of the debut…