Japan now exports more than 6.5 million vehicles every year. According to the statistics of the Ministry of Land, Infrastructure, Transport and Tourism, the export of automobiles was about 38,000 a year in 1960, but exceeded 10 million ten years later in 1970. The country is beginning to move toward a full-fledged automobile exporter.
自動 車 Car carriers that have loaded cars and crossed the sea have supported exports. In the era of low exports, it would have been enough to put cars on a cargo ship, but it is unlikely that the number would exceed one million per year. Then, in 1970, Japan's first car carrier, the Daito Toyota Maru, was completed and is now on a maiden voyage.
Kawasaki Kisen, famous for its K Line brand, ran the first car carrier in Japan called PCC [Pure Car Carrier]. Let's talk to Eiichi Murakami, the company's Managing Executive Officer [at the time of the interview], at that time. 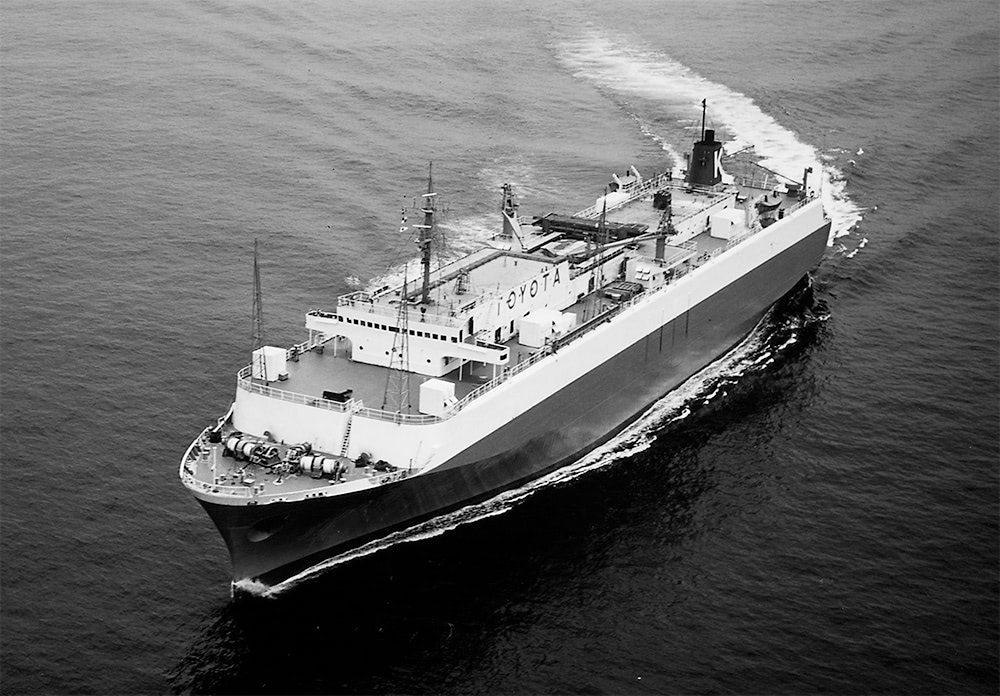 Completed in 1970, Japan's first car carrier "The Tenth Toyota Maru". This is a car carrier dedicated to the coming era of car exports. 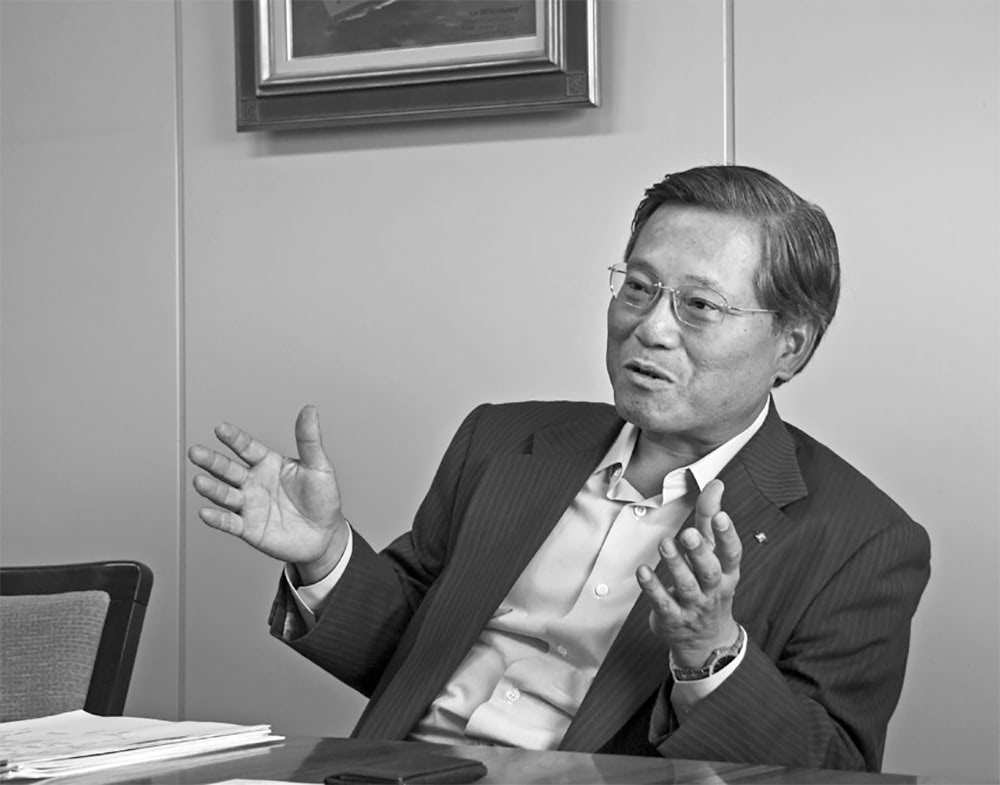 "Nissan Motor has begun operating an export ship called Oppama Maru in 1965 and Zama Maru in 1966, but this is not a car carrier, but it mainly transports cars to North America and returns with grain, etc. In a similar way, we ordered Daiichi-Yota Maru for North America in 1968 with an order from Toyota Motor Corporation. It was nice until I carried the car, but the grain on my way home did not arrive at the port due to heavy snow in Canada, and I was stranded for 50 days at the port. It was told by Toyota that it wouldn't be, and we needed a car carrier. ''

Certainly, if the outbound route is full of cars but the return route is empty, it will not normally be a business. On the other hand, at that time, when automobile exports are increasing at an eel-climbing rate, if the cargo is open for 40 or 50 days, this will also affect business. At that time, Shiro Nagumo, who was still acting Deputy Manager, and later president, came up with the idea of ​​launching a PCC.

"About 1,250 units were a profitable line for a combined use ship, but we could conclude that if we could increase this to around 1,650 units, we would be able to make a profit even if the return trip was empty. We worked with shipbuilding maker Kawasaki Heavy Industries on the development of PCCs to increase the number of units, and completed it in the 10th Yota Maru.The large PCCs so far were unprecedented in the world, and development was just fumbling It seems like it was about 20 knots in the pre-launch trial, which was quite fast even at the level at that time. ''

Completed in 1970, the 10th Yonotamaru was 150m long and only 2m longer than the previous dual-purpose ship, Daiichiyotamaru. Has increased significantly to about 2070 units.
"In addition to the number of vehicles to be loaded, we are reconsidering the system for loading and unloading cars. At Daiichi Yota Maru, we used elevators to carry cars to each hold, but this takes an extremely long time. At the 10th Yoyota Maru, a loading entrance was provided on the side wall of the ship, and the car could go to the loading area by self-propelled through the ramp way, which significantly reduced the loading and unloading time. ''

Move from the car ladder to the designated place by self-propelled. After parking at the designated location, the drivers come out of the boat in a pick-up car called a reed car. Car loading is a systematic and smooth flow. Work progresses at a surprisingly high pace, with the number of vehicles installed per hour well over 300.

光 The sight of cars running into the hold may be the norm nowadays, but this is possible because the PCC is exclusively for cars, and the dual-purpose ship has no such facilities. According to data from Kawasaki Kisen, loading is increased from 300 to 350 units per hour, and unloading [lifting] is increased from 200 to 250 units. At the Tenth Yottamaru, speeding up has been added, reducing the voyage of North America from nearly two months a round to 26-27 days. This efficiency improvement is great, and it means that even if the return trip is empty, it will be profitable.
By the way, the name PCC was invented by Mr. Nagumo, and it is now a common language in the world. The loading capacity is based on the vehicle size of the Toyopet Corona [RT43] at that time, which is used as a global standard.

"In the beginning, automobiles were hated by shipping companies. Not only are they delicate to scratches and rusts, but when cars are loaded, nothing can be loaded on them. Otherwise, the price of vehicles at export destinations will rise and lose competitiveness, so we will have to keep it low, but car exports that will support the Japanese economy will be indispensable in the long run, and for that purpose a car carrier is indispensable It will be something like that. ''

PCThe PCC can be said to be the product of Nagumo's foresight, but this Japan's first PCC, the Tenth Toyota Maru, has been devised in how to load the car itself.
"When loading, the distance between the left and right of the car is 10 cm, and the distance between the front and back is 30 cm. Since 10 cm is not a gap that people can pass, it can prevent accidentally passing it and scratching it, and 30 cm before and after Is the space required to secure the car to the floor and to look around for looseness, and that workers wear special work clothes with no exposed buttons to avoid scratches. I take care of it. " 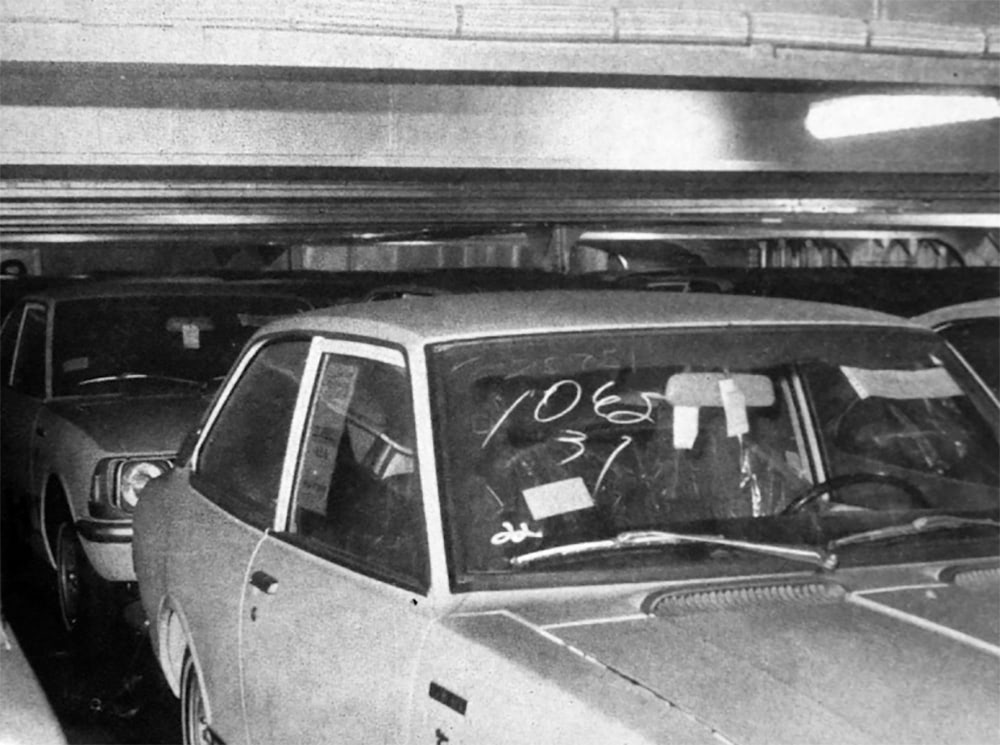 When the vehicle comes to a predetermined place, the lashing operator fixes the vehicle. All the cars are unified and lined up in a tightly packed state.

間隔 10cm left and right spacing! Surprising to, it wasn't just for stacking that many things that stuck together. As a result, the damage rate of cars in PCC is now almost 0.01%. It is said that the rare damage is not scratches or dents, but hairline scratches can be found.
According to Kawasaki Kisen's data, in the case of a dual-purpose ship such as Daiichi Yota Maru, the floor plate on which the car was mounted was detachable [because it would be a hindrance when loading grain on the return route], so if you remove it and ship it on the deck, It was said that they could not prevent rust by bathing in seawater. When the floorboards are reassembled and the car is put in, and the voyage goes long, the rust moves to the car, but there is no worry about PCC after the 10th Yota Maru.
だ が It is a domestic car that has taken the world by storm because of its reputation for quality. However, it is not an exaggeration to say that this was due to efforts to ensure quality on a car carrier.

However, although it was a car carrier that greatly contributed to the export of domestic cars and, consequently, to the development of the Japanese economy, there were times of difficulties in the late 1980s and 1990s. The problem of trade friction led to local production in North America, which reduced exports to North America.
"In that era, we sometimes abandoned ships because of difficult-to-reuse PCCs."
を 受 け Despite the tide of that era, demand for PCCs has increased worldwide, and at present about 17 million cars are traveling around the world every year. Kawasaki Kisen currently has approximately 100 PCCs in service, including the latest ADRIATIC HIGHWAY [capable of loading 6,200 cars], and carries many cars. The towering car carrier is impressive for everyone. It is a figure that has supported the Japanese automobile industry under the edge.

Published: Nostalgic Hero October 2008, Vol.129 [All contents in the article are as of the time of publication]
Source link

I wanted to sell the R34GT-R! Skyline admired when you were young | Prince Skyline 2000 GT-AII Vol.3

That Porsche? An unexpected Porsche identity that was sold for about 100 million yen

The number of people choosing is increasing? How to buy a “smart” car