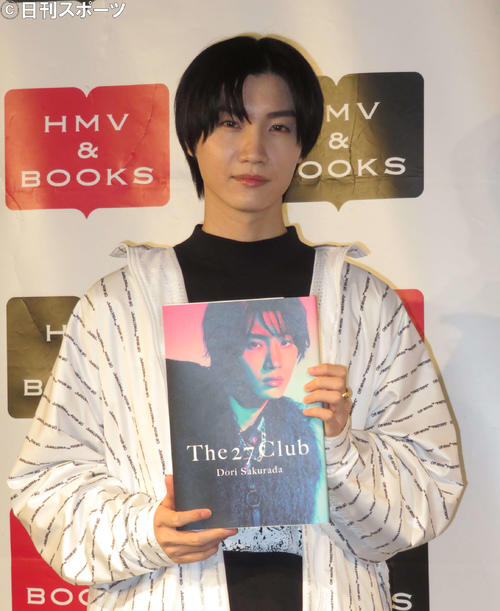 Actor Sakurada Dori [28] held a release event for the second photo book “The 27 Club” in Tokyo on the 7th.

The title “27 Club” refers to top musicians and stars who died at the age of 27, such as Brian Jones, Jimi Hendrix, Janis Joplin, Jim Morrison, and is partly urban legend. Sakurada said, “I knew this word when I was little, and I thought I would enter it. But today I was 28 years old and I thought I was different.” “Sure, it was n’t something that was achieved, nor was it really influential.

This day is my 28th birthday. A surprise cake with a printed photo book cover was handed out. “The title is 27 and the number“ 28 ”is adorable,” he said. “I think I was 27 years old because I had all the memories.

When asked about the 28-year-old aspirations, “This title is not a part of myself until the age of 27, and I killed myself, but I decided to start a new life again. There were good things and bad things, but I would like to meet various things with fresh feelings, not trace them. "

"Nurse" disappeared from the laughing point and the audience disappeared

“ International music library project '' that can download more than...

Journeys in Japan 〜Kagoshima: The taste and style of "kuro" culture〜...

“ International music library project '' that can download more than...